Ok, so it's a Saturday night and I'm blogging. Lame.


We did go out to dinner with family, which was fun; and we did have intentions of going to the dollar movie but the line was all the way down the sidewalk so we passed.


Therefore, here I am blogging on a Saturday night. Actually though, there are way worse things that I could be doing so, I'm not complaining...


So here's the deal: I'M OBSESSED WITH MOD PODGE!
Do you think there is an official name for those of us obsessed with it? Something like "modpodge-itis" or "modpodge-nucleosis" or maybe something more to the point like "that-crazy-lady-is-way-too-obsessed-with-mod-podge-bless-her-poor-hubby"???


Well, whatever it's called I've got it! Bad! I caught the contagious fever from fellow bloggers and really there is no cure. I probably did the worst thing possible which was buy the biggest thing of mod podge at wherever I bought it from months ago! The thing is still very full regardless of the fact that I am prone to mod podge EVERYTHING!


Something's that I have mod podged have turned out cute...other's not so cute...it never matters the end result, I always want to do more. Anyways, you get the point.


A while back I did this mod podge project and it definitely had a cute result! Yay!


AW & I have an old TV tray that we use as a side table in our living room. One week Hobby Lobby had their scrapbook paper 50% off so I got a few pieces and mod podged them to the once boring TV tray and... 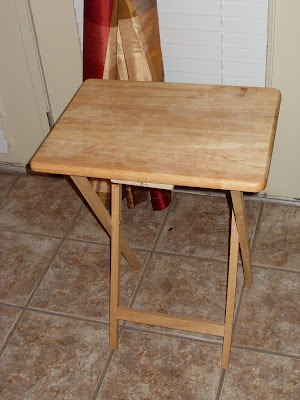 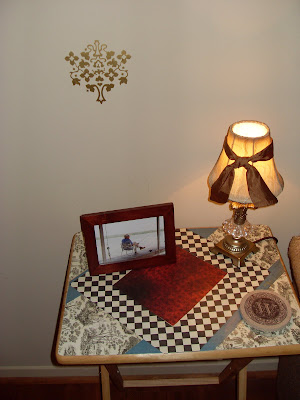 As I said, I am quite happy with the result! I thought about painting the legs and edge black but since we live in a smaller space and already have a lot of black furniture I decided it would be nice to leave it light!


Here's the thing...I have a summer job before school starts however things have been slow so they haven't needed me as much. Well, one day after I had cleaned the entire apartment (to the point of even vaccuuming the furniture) I needed something to do.


We have a cheap, black, Wally World bookshelf and I decided to mod podge some extra wedding pictures to it.


Why? I DON'T KNOW! I mean it's not completely horrid but it is slightly tacky.... 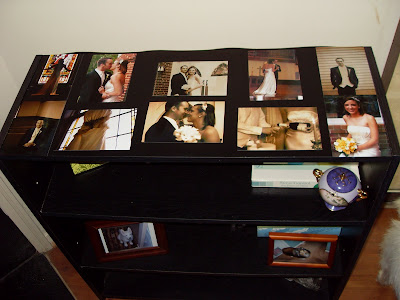