Last Saturday I had my first sewing lesson. I went to my aunt's house & she helped me make a skirt. It was lots of fun & a really nice mommy break, in fact I was gone for 6 hours!! My longest mommy break ever!

While I was away AW was having father/son time and during that time decided to take Anderson outside to play.

Anderson loves to play outside so this was a seemingly-great idea. Except it's still a little chilly outside which resulted in a very bad cough. Worthy of an ER trip & everything.

Thanks to a shot in the thigh he seemed to be recovering nicely but for the rest of the week we were cooped up indoors. Boo!

This past Saturday rolled around & we were officially stir crazy! Hubby had some studying to do and I took it as an opportunity to get out of the house to give him some peace & quiet (or just get out!).

I googled indoor play places and discovered one that looked great, the only thing was it was all the way down 280 & we had less than a 2hr time frame for our outing; not worth the drive.

I found another play place, called & explained I had a 13-month old & asked if he would enjoy it.

I was assured he would with their toddler play area & other toddler-friendly activities.

First, it was a Saturday afternoon at 4:00. Do you know what that means? BIRTHDAY PARTY CENTRAL!

There were a bajillion kids running amuck all over the place while the parents hid behind their iPhones. Some were attempting to capture a picture of their little sweetie "having a super fun Saturday afternoon at Little Billy's bday party! #LoveBeingAMommy". While others were taking it as an opportunity to completely zone out.

But there were 2 moms who weren't hiding behind their sanity devices. I'll get to them in a minute.

So, I sign the waiver (1st clue this wasn't toddler-friendly), pay & go in. I find the Toddler Play Area & discover this is basically a day care room that requires parental supervision with no adult-sized chairs around!

I removed our coats sat in a tiny chair and tossed balls in the ball pit to entertain Anderson. It was a losing battle.

There was a giant window so he could look out & see all of the children running around & "having a super fun Saturday afternoon at Little Billy's bday party!".

I decided it was only torture to let him watch the other children run around while all he got were some grimy plastic balls. I girded my loins & entered jungle.

He loved it. He was running all around, chasing kids too big to notice him & continuously falling only to have his hands barely not stepped on by herds of grade-schoolers.

I followed ever so closely all the while lugging our coats & my oversized diaper bag that clearly says, "I'm a first time mom!!!".

At one point there was a group of 6 year olds gathered in a circle planning their next move. Anderson was watching on with intensity. In fact, he was so enthralled he lost his balance & fell down. One of the girls thought it was her fault, turned around, proclaimed, "I'm soooooorrrry!" & attempted to pick him back up by sliding Anderson's armpits all the way up her arms & hoisting him upright. I laughed.

Surprisingly, her technique worked and Anderson appreciated some finally achieved attention. It was sweet.

Remember those two mommies who weren't hiding behind their iPhones? They watched the whole thing with severe disapproval. Nay, horror.

How could I let my tiny son run around amongst these oaf-like children & then be man-handled by a first grader?!

Well lady, when you've been cooped up all week and pretty much all month you'll do anything to get out & let your child run free. Ok, maybe YOU won't. That's fine. But I have to.

In the end we were there a total of about 45 minutes. He expelled some energy, it was a change of scenery & a lesson well learned.

NEVER GO ON A SATURDAY AFTERNOON!

Supposedly it's "toddler city" during weekdays, perhaps we'll try again then. Or perhaps I'm crazy. Either way, IS IT SPRING YET??? 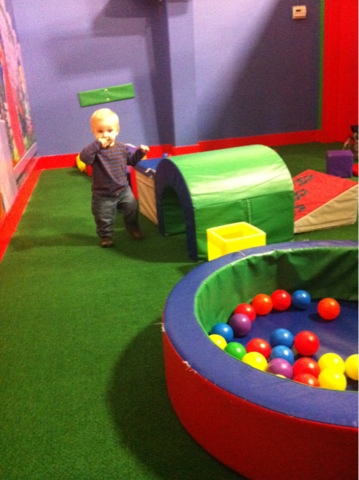