The long three months of summer seemed to drag, lag, stagger and completely stall out. Only communicating with your brother via post for three months makes you appreciate technology. Even "ancient technology" like email.

If only we could email...

If only I could shoot him a text...

Not knowing what he was doing each day, not seeing him, essentially being cut off was not easy. But as hard as it was for us it was even more difficult for him. We all still had each other. He was on his own.

We could chat with friends, watch the news, send each other quick texts asking, "Any letters today?"

He couldn't. No news for him. No chatting with friends. No quick texts just to say "hey".

All the letters we received were generally positive and even through the ancient form of letter writing I could tell he was exactly where he was supposed to be. Doing exactly what he was made to do.

The only letter that made me sad was one that read, "Almost every night I have some dream of being home and we're all eating together". As I read that line to my sister she too began to cry. The letter had been positive and informative with lots of details of his day to day routine. Well, as many details as will fit on a government-issued 5x7 piece of paper.

Every night as we sat down to eat dinner, AW would pray, thanking the Lord for our food and praying for David. Every week at small group my prayer request was for my brother. I was so worried that he would get hurt or sick and somehow his graduation would be delayed and 13 weeks would turn into much more.

Little did I realize that he was not just surviving but thriving.

Finally, the long three months of letter writing had come to a close. While he just had one more week left on the island there was not enough time to send another letter. It was time to begin the trip down to the lowcountry.

The weekend before we left I still checked the mailbox every day just in case one last letter had gotten stuffed in there. No more letters came. I began washing the clothes we were going to take. I began cleaning like a mad lady. Partly to fill time but mostly because I couldn't stand the thought of coming back to less than spotless home. I knew it would be a long week away.

Monday finally arrived! After lunch, AW & I headed to Atlanta to see my best friend. The last time I had seen her was at my baby shower in November. She had never met our sweet baby boy.

We arrived at our hotel where Anderson was more than happy to be. 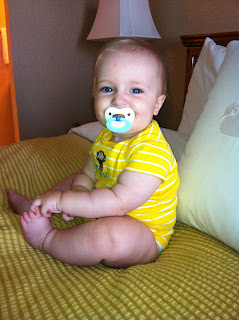 Stephanie met us there & met Anderson for the first time. Of course it was love at first sight (for both of them)!

We headed to the Flying Biscuit for dinner and enjoyed some yummy breakfast food & fun company. 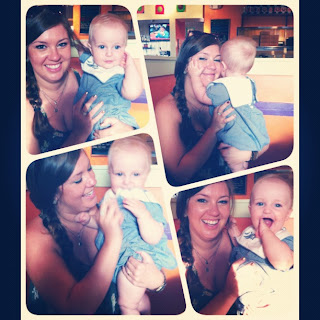 Then we made a girls-only trip to Trader Joe's where I found some great coffee & Stephanie introduced me to this stuff: 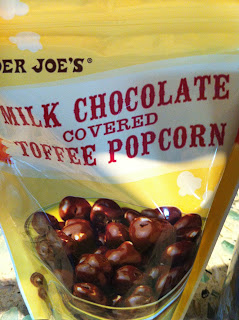 Yes, it's delicious. And yes, it's addicting. We came back to the hotel where we proceeded to eat one whole bag of deliciousness and watch the Olympics until 11:00. It was so much fun & so fun just to be together.

The next morning, AW, Anderson & I loaded up and headed towards Savannah.The old trees welcomed us beneath their shade and the overcast sky kept us cool as we wandered the streets.

We stopped in to say hello to Paula. Unfortunately she didn't get my message that we were coming...hmmm...oh well, maybe next time, PD. Thanks for the delicious cornbread anyway!

We proceeded to walk in and out of the cute shops all around town. In and out of the squares and down  the cobblestone street by the river. After a few hours the sun decided to make an entrance. We took that as our cue to exit. 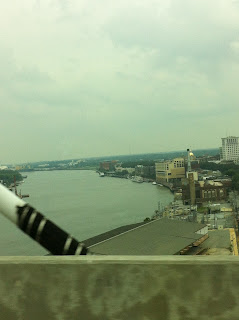 Over the bridge & out of Savannah we went. As we journeyed down the two-lane highway the palm trees signaled that we were getting closer and closer. The air became thicker. The breezes moved slowly, the sky was hazy. Run down homes and businesses stood on either side of the highway with little pops of newness and modernism scattered throughout.

There wasn't much to look at and as we made turn after turn, following Google's directions just so, I saw a sign. Literally. It read, "Parris Island 10".

10 miles from the mysterious place I'd been sending mail all summer. I squealed and asked if we could please go find it. But Anderson protested so we kept on our path. We arrived at the house in Beaufort.

It was lovely with beautiful details and lots of open space. This is where we would stay and attempt to rest before seeing my brother. 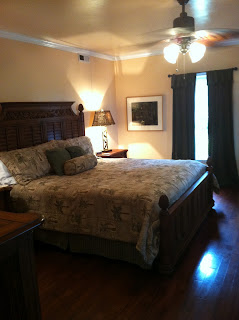 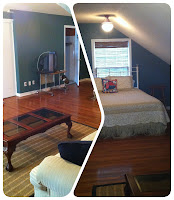 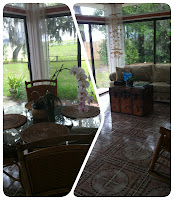 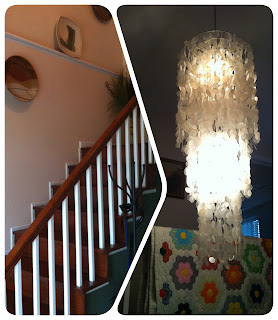 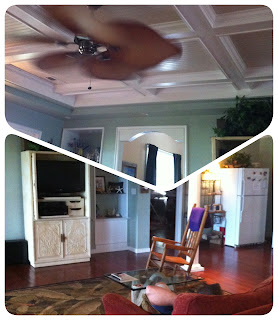 As AW & I got settled in & wandered the house I hung up my wreath. The wreath I had been toting around all summer perhaps as some weird personification of David. At last it had arrived in South Carolina. 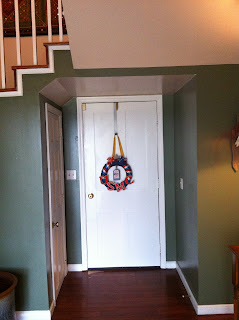 The house was full of off-beat details and fun little things. 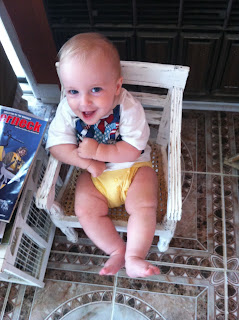 But my favorite touch was the Marine corner she had set up displaying pictures of new marines whose families had also stayed in the home to pick up their loved one. Their notes & letters were all so sweet and made me even more anxious for Thursday morning. 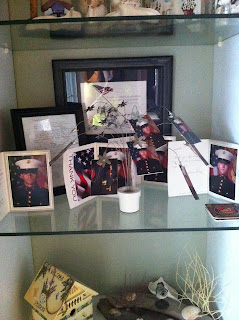 As the sun began to set we enjoyed the view from the sun room and took in every peaceful, quiet moment knowing that in a few short hours the house would be filled with loved ones and sleep would be hard to come by. For those few moments we were as still as the thick South Carolina air. 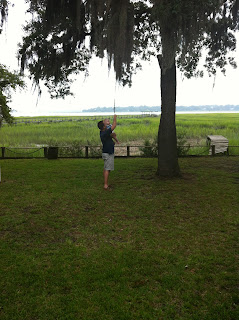 Midnight arrived and so did my parents along with Stephen, Nick and Cami. We talked for a short while before heading to bed where we found ourselves sleepless with anticipation.

Wednesday morning came and we finally made the drive to Parris Island. It was real. It wasn't just an address anymore. It was roads and sand pits, palm trees and sand fleas. It was hot. There were people everywhere and Marines everywhere.

Every Marine looked the same. I found myself scrutinizing each face in hopes that I would see him. My parents had accidentally run into him but couldn't speak to him. They could only watch as he walked by just a few steps away.

We took an official tour of the island and got to see everything he had written us about. The confidence course, the sand pits, the squad bays, the rifle range which sang with the shots of over a hundred rifles.

It was all so real.

We shopped in the MCX and finally left. Even more anxious than before because tomorrow was it. We were finally going to see him, hug him & get to be together. We would all eat together again.

Wednesday night left us with even less sleep but more friends and family.

Thursday morning we were all up very early ready to watch the Moto Run & see our Marine! 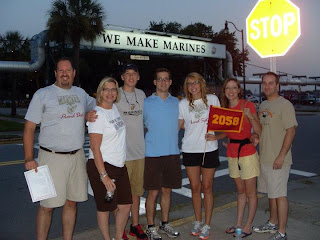 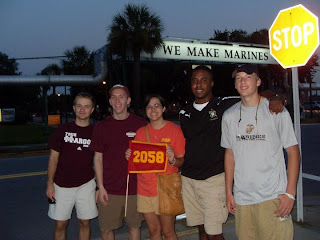 I wish I could describe what it was like seeing him for the first time in three months but I just don't think there are words. You might have already seen these videos but I'll just share them here so you can experience a little bit for yourself.


After the run it was off to the All-Weather training facility for the big moment.


Finally, we were all together again. 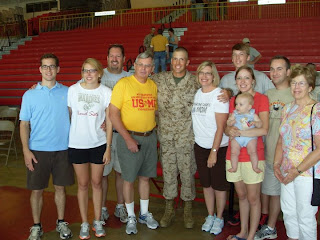 Here was this person I'd known my whole life yet had changed so much. Suddenly those three long months seemed like a very short amount of time for a person to change so much. He was mature. Serious. Respectable. A man. A Marine.

It caught me off guard.

The day passed too quickly and our 5 short hours together disappeared along with all shade from the sun. We were wiped.

Back to the house we went. We crashed. We had seen him. We knew he had made it and all that stood between us & him was a formal graduation ceremony.

Once again, Friday morning, we were up before the sun. We arrived on base to watch  the Colors Ceremony where the Marine Corp Band played, the flag was raised and Brigadier General Reynolds spoke. She is the top dog on PI and quite a force to behold.

We moved to the Parade Deck and settled into the bleachers along with thousands of others. Except we had awesome seats. Remember I said he wasn't just surviving but thriving?

He was one of seven honor graduates out of 471 total graduates. He got to wear a special uniform and carry his platoon's flag. He had made it.

We watched the ceremony which was steeped in history, tradition and pride. As the ceremony rolled along so did the thunderclouds. They ended it prematurely and we were disappointed but the heat had about licked us once again so we retreated to the shade behind the bleachers.

There we got to shake hands with Brigadier General Reynolds, who was very nice, and have our picture made with her because David was an honor grad. 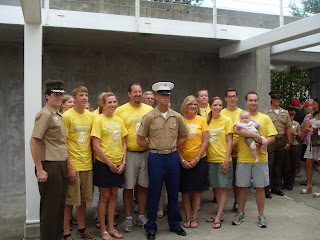 From there we got in our cars and headed straight home. It all ended so quickly.

A week later I'm still excited by all the pictures and videos from that week. I'm so proud of my brother. So happy to have him home. And finally have peace with what he's doing.