Well, you may already know all about cast-iron skillets but I didn't and just on the off chance that you don't I'll share my new found knowledge.
First, I'd like to say THANK YOU to my friend Katie's mom! She was the one who enlightened me on how to care for our cast-iron skillet.
AW has had a little skillet since college. His parents just gave him one of theirs to use when he moved into his apartment in Montevallo. Well, AW is a bit of a clean freak and slightly OCD so after he would use his skillet he was sure to scrub it clean with soap and water. Big Mistake!
This is what happens when you always wash your cast-iron skillet: RUST... 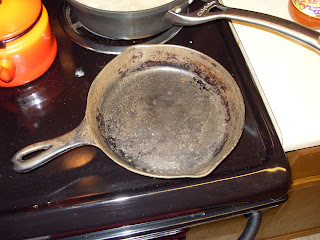 Yuck! Not what you want to fry your chicken in...
Well, I was told "Don't throw it away!!!" It can be saved! Hooray!
So, this is what you need to salvage your rusty skillet: 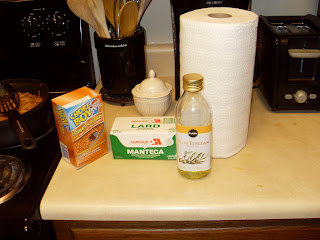 A steel wool or copper wire scrubby, paper towels and either olive oil or lard.
The scrubby is to get all of that yucky rust off. And it really does most of the work for you.
Just use mild soap and water and scrub, scrub, scrub!
Next, pat dry the skillet with paper towels. Then place the skillet in a pre-heated oven at 250 and let it dry for 20-30 minutes.
After your skillet is dry season it with either the olive oil or the lard. I chose to use lard because that is just the old-fashioned way. Plus, I've never used lard for anything so I thought it would be fun!
Place the skillet in the 250 oven and leave it in there for two hours.
After 2 hours let it cool and put it away. It will be nice and shiny and rust free: 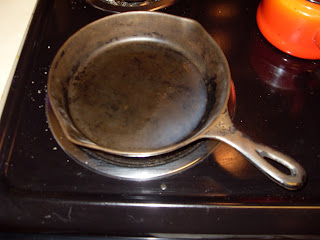 Your turkey bacon will fry up nicely the next morning in your newly seasoned skillet and you will be so happy (and so will your hubby!): 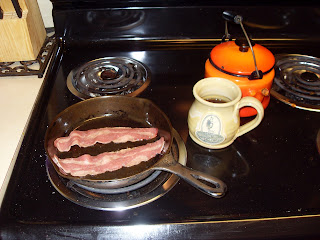 To store and keep up your skillet do not wash it! Instead use a paper towel to pick up any leftover pieces from the skillet and gently wipe it out. Some people even suggest placing a paper towel on the skillet while storing it.
A couple of weekends ago my mom, sister, grandmother, cousins and I all went shopping for my aunt's birthday and I was telling them about my skillet-salvaging experience.
My sister, who was the only one not married, was a little surprised that we all had cast-iron skillets. We told her a smart wife always has one just in case she catches her husband with another woman. She needs that skillet to be in good shape for when she administers justice =)
Posted by Wild Woman at 5:13:00 PM