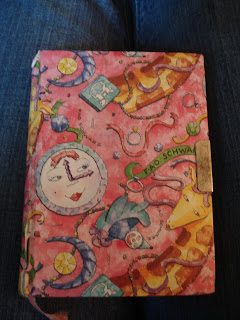 As my mom was cleaning her house last week, she came across my old diary. My dad got me this diary from FAO Schwartz in New York City when I was in the second grade (1995). I wrote in it for 5 years. I have been re-reading it and enjoying it immensely. I decided to share some of the entries here on my blog. I hope you enjoy them although I know that you probably won't enjoy them as much as I have ;) Also, I will spell everything exactly as I spelled it in my diary and for privacy I will change some names. I will * the names I change.
I would also like to add that in the front cover I wrote a warning for anyone who dared to pick the lock and peer inside my diary. It says:

"PRIVATE! If you look you'll be sorry!
This means you! Too!"
In the middle of this warning I drew an illustration of just how sorry you would be with a picture of a head stating "before" and a picture of a neck stating "AFTER! no head!" And just in case you still didn't get it I drew another head/headless illustration. You should truly feel privileged to be reading this information as I could take your head off.
READ AT YOUR OWN RISK! 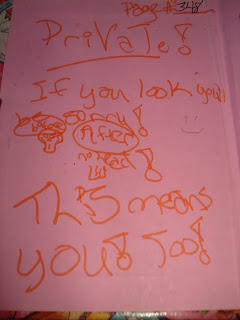 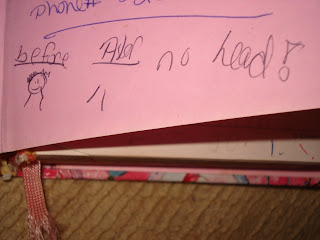 One day my cousin Katie had a boyfriend his name was Dana. That was pretty weird for a boy. then today she told us that she dumped him. Because she didn't like him.

Anna my little sister has this boy in her class-room. His name is Stephen. He like's her but she dosn't like him. One day Stephen's friend said go up and kiss her he said "no".

*Taylor Edmunds some times kisses all the girls. Us girls do not like that at all. I mean a boy kissin girls that don't even like him for a boyfriend. grose! But we like him for a friend. He is nice.

My mom when she was little she and her sisters always had a crush on Joey. But he is not my: uncle or Dad. I think it was her cousins big brother. She said she wished he was there boyfriend.

My cousin Phillip has a girlfriend. Her name is (Kristy) with a "C" (Cristy).

...so apparantly as a child I was obsessed with everyone's love life!