I have bittersweet news about our beloved husky, Toby. He has started jumping fences, a notorious and pesky husky habit, this summer and roaming unsupervised. He is a beautiful, AKC registered, un-fixed Siberian Husky who is so friendly, sweet and a big baby with the softest white fur and gorgeous blue eyes. A prime target for dog catchers, kidnappers, abusers and breeders. We tried keeping him inside. Mistake. The result was a bedroom door stripped of paint and and an oriental rug with a hole all the way through.

AW & I made a very difficult decision that we talked about for weeks and went back and forth about a thousand times. We decided it would be best for Toby to live somewhere with more space and another dog. As of Monday, Toby has a new home with great people who have another husky. I have cried and cried and miss my baby bear so very much but I just keep reminding myself that he is happier and healthier now that he can run "free". I just hope he knows  that I love him dearly and always will. Here are some pictures of us playing on our last afternoon together: 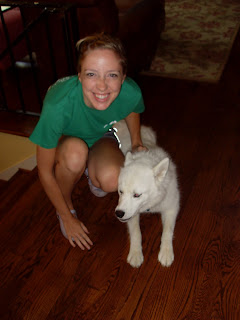 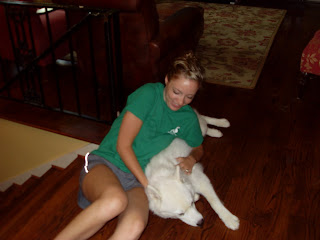 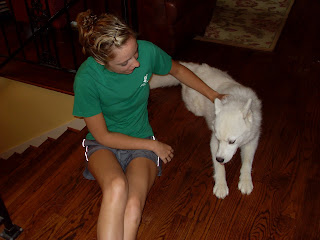 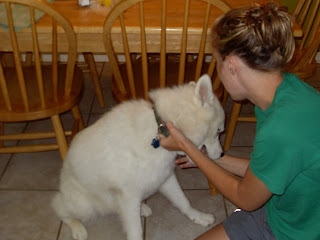 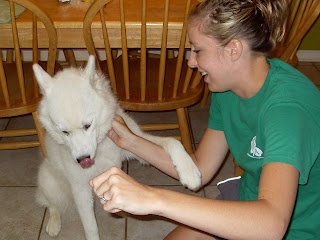 Not having a dog is pretty much not an option for us. We love dogs. All dogs. We both grew up with dogs and can't get enough of them. I always like to say that when we have a house one day I want to have 4 babies & 4 dogs! Think about all of the chaotic fun we would have!
Anywho, our first night without Toby was pretty much awful and the next morning was even worse. It was too quiet and there wasn't a friend to greet us when we woke up. While AW ironed his pants there was no fur-ball to talk to. When I stumbled to the kitchen there was no fur-baby licking my hands. It was sad.


So, Tuesday morning I was at the Greater Birmingham Humane Society waiting for the doors to open at 10a.m. After much talking and meeting lots of great people and 3 hours later I was headed home with our newest fur-family member, Artie! Artie is a terrier mix that was abandoned at the shelter. They had to chase him down because he was so scared and once they finally caught him they knew nothing about him, not even his name. He is 13lbs. of ferocious fun and just the sweetest, most cuddly thing ever!
I am definitely a "big dog" girl. The bigger they are the more I love them. I just can't help it. I am just drawn to those big babies but because we live in a small place with no yard a big dog is not an option. I never thought I would own a small dog much less love one but Artie has stolen our hearts immediately. Artie was named "Rob" by the shelter.  It is short for Robin from Batman & Robin because he has a black "mask" around his eyes. He has light skin with spots all over it and scruffy, wirey, white hair that is thin enough to let those lovable spots show through. One of his ears is solid black and the other one is white with black spots and his tail never stops wagging. He is so happy and you absolutely cannot help but be happy when you are around him.
We decided on the name Artie because he definitely looks as though he has some Scottish Terrier in him. My mom googled "scottish names" and we had a plethora of options. McArthur was one of the plethora so we shortened it to Artie and that has been his name since 6p.m. Tuesday!


My baby brother and I took Artie to PetSmart yesterday and decked him out. He has a new kennel, new leash, new toys and treats and some delightful shampoo and conditioner (Tuscan Meadow scented). After so much shopping it was bath time. Becaue Artie is "fun-sized" he fit nicely in the kitchen sink and did really well although we was not loving it, that's for sure! And he did not smell like a Tuscan Meadow afterwards either. He basically just smelled like a wet dog. But he looks and feels a lot better!
AW & I decided to curl up on the couch for our nightly routine of Andy Griffith and ice cream and Artie decided to join us. He just curled up so sweetly on my chest and drifted off to sleep. We went to bed after watching Barney Fife quit the police business to become a vacuum salesman.
*SPOILER ALERT*  (No worries, he comes to his senses and rejoins Andy at the end). We let Artie sleep in the bed with us and he found himself a nice spot at the foot of the bed where we all three slept soundly and cozily. When I woke up around 7:15, AW was so happy and reporting "he is so pleasant".
While I miss my baby bear, Toby, so incredibly much I am so happy to have found Artie and I think he is just as happy too! As I type he is curled up on my feet taking a mid-morning nap.
I received a text about Toby's first night at his new home. He went for a run with his new momma and then slept at the foot of her bed all night and has been doing great!


Enjoy the pictures of my new baby, Artie: 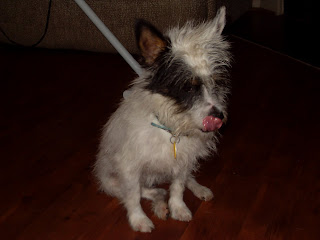 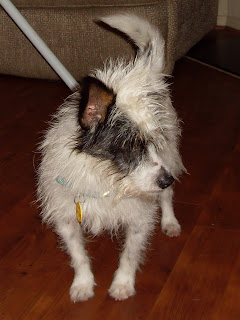 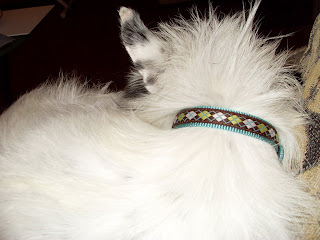 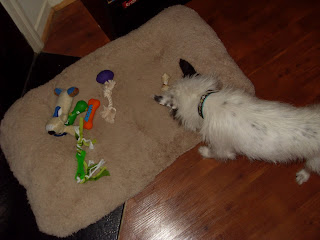 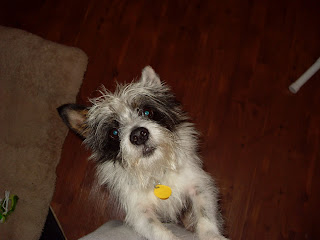