This is the face of the trial version of motherhood: 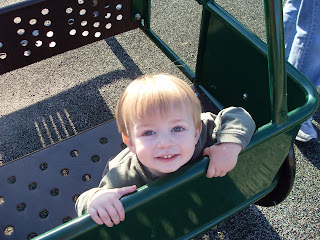 Pretty darn cute, huh?
This is my cousin, Amanda's baby. Baby Will. He is the cutest little thing and the sweetest too. He is so loving and just precious and I just want to eat him up!
Amanda & her hubby got the chance to get away for a few days in Tennessee so AW & I got to keep Baby Will. We had him Tuesday night to Friday night and we had so much fun!
Tuesday night he woke up and was in a strange, new place and wasn't so sure but then AW started reading him stories on our bed and he was quite content: 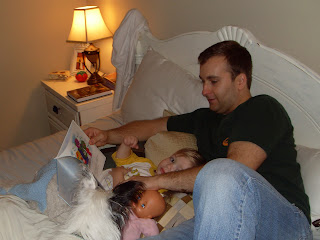 Artie however, was quite jealous of the new little human that was getting all of our attention: 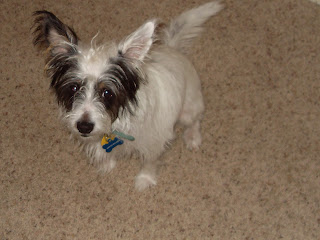 And although Artie was very jealous, I must say he was quite patient and generally well-behaved. This was a big deal since he is quite mean towards children when we go to the park...yikes!
One aspect I must admit that I was unprepared for was the messiness of a baby. This sounds like common sense that with a baby comes a mess but you really don't think about it (at least I didn't)! The first morning that Baby Will woke up his diaper had leaked and his pj pants were saturated as well as his bed sheet and I didn't realize all of this until AFTER I had laid him in my bed and snuggled and read books....woops....
Also, after breakfast we came into the bedroom to change for the day and he reached in his pants then wiped something brown on my sheets... 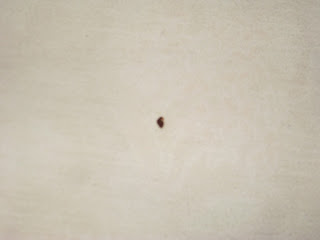 Thankfully, it turned out to be the chocolate cheerios we ate at breakfast and not what I suspected it to be, however since I already had urine on my sheets they were going in the washing machine regardless...Nice.
But regardless of the little messes here and there, Baby Will was the best little house guest one could hope to have. Afterall, he didn't even require a full sized bed. We just popped open his little bed & it fit perfectly in a corner of our room: 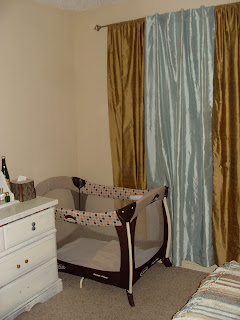 And his clothes and shoes are so little they didn't take up any room at all. Look how sweet his little bitty baby shoes are: 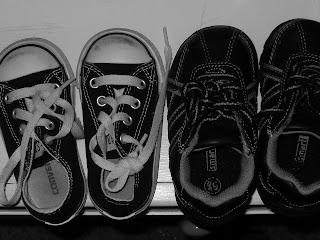 And he must have really liked his setup because every night he slept all night without waking up and the earliest he ever woke up was 7! He would sleep 8-8.5 hours a night plus a 2-3 hour nap every day! He was great, so great in fact, I think he has AW & I fooled on how easy kids are.
He was always happy to ride in the car: 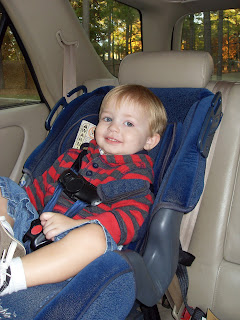 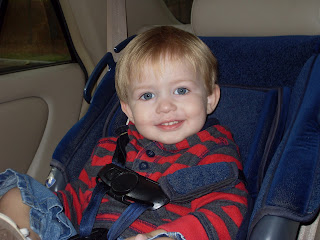 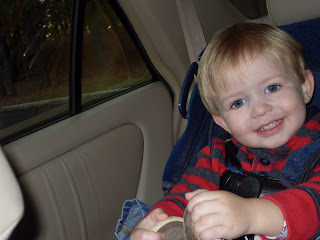 And he had so much fun taking a bath: 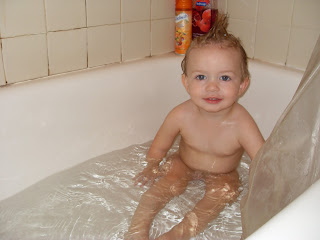 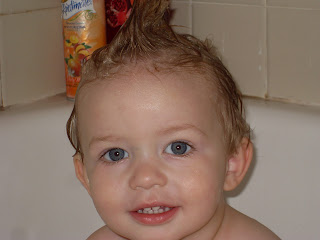 And every morning he was so sweet & loving (I was taking his picture and he leaned against me & was hugging on me so I snapped a pic): 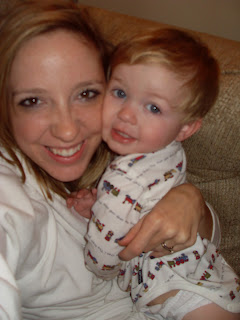 He was seriously always so happy and always so sweet. One afternoon we were shopping at Hobby Lobby and he kept saying my name, "WaWa" and when I would look at him he would have his arms reached out for a hug. He was so content just running my errands with me.
We did all sorts of fun things! One night we met up with his Mimi & his baby cousin at the Galleria to ride the carousel (although he didn't exactly love that experience), one morning we went to the library for story & music time and on his last afternoon with us we went to the park! AW had the day off so we went to the park for a couple of hours and that was probably the highlight of his stay with us: 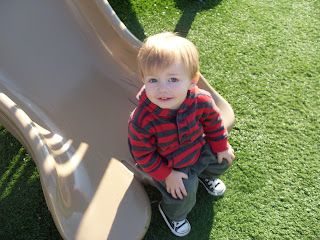 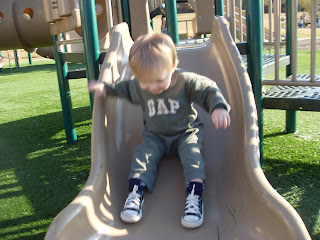 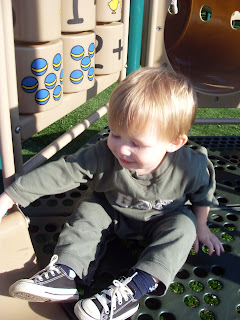 This picture he wanted AW to be in it with him. He said " 'mon" to AW & grabbed his hand and scooted over to make room: 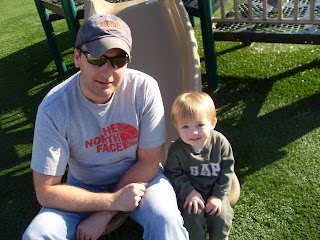 See what I mean? SO SWEET!
We read books, watched movies, took naps and played "bootball" (football) which meant one of us would throw, the other would catch and then we'd run through the apartment running "TOUCHDOWN!" while we waited on AW to get home from work.
One night traffic was worse than usual because it took AW a little bit longer to get home and I had two hungry faces looking at me wondering where their dinner was: 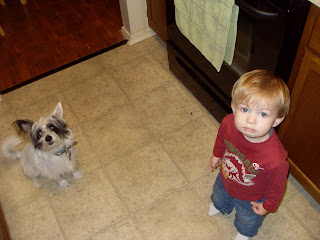 But he made it eventually and everyone stuffed their faces with spaghetti (well, Artie had to eat dog food but it was all the same to him).
Overall, it was a great experience having Baby Will stay with us and I would be more than happy to have him stay again! And I must also add that he made the experience of having a baby around seem WAY to easy...not that I'm complaining ;)
Posted by Wild Woman at 6:05:00 PM